For the Love of the Game

Havana, Cuba – The pitcher, dressed in all red makes eye contact with his catcher before winding up. The baseball flies from his hand, only to make direct contact with the hitter’s bat. What could have been an easy out at first base becomes a single as the ball slips through the hands of two infielders. Then that single turned into a triple as the ball gets thrown past the third baseman, and then the runner, dressed in an old Yale University t-shirt, rounds third base and dives into home plate to high fives and screaming from his teammates. The pitcher winds up to throw as his teammate looks on. Photo by Alexa Coveney.

It’s a scene that sounds familiar to any American who has ever been to a Little League baseball game. Except this is in Havana, Cuba, and the conditions these boys play in are anything but ordinary.

On any Saturday morning, a group of young boys can be seen playing a game of baseball at the edge of what was Ernest Hemingway’s property on the outskirts of Havana. It isn’t your typical American Little League game. The players don’t have matching uniforms. Instead of cleats they wear shoes few American baseball mothers would let her child take the field in.

The land these boys play on has been used as a baseball field for more than half a century. Ernest Hemingway first saw a group of boys in his neighborhood in the 1940s and 1950s. He invited them to play baseball on an open spot of land on his property. The land is not the typical field that Americans would see on a weekend at a Little League tournament. Rather, it is a plot of green grass surrounded by trees that eventually leads to a hill where the right-fielder watches infield. Cayuco Blas is one of the young boys who first played on Ernest Hemingway’s property in the 1940s and 1950s. Photo by Janelle Clausen.

One of those original players was Cayuco Blas. He remembers growing up and playing baseball with Hemingway, who was the pitcher, on his estate. The young children knew nothing of Hemingway’s fame or controversy, according to Blas. They only knew that he was the pitcher, and he gave them a place to play ball.

Jorge is a baseball coach in Havana who works with Hemingway Baseball, a local version of a Little League. He works with boys, ages five to eleven every day of the week just yards away from the house Ernest Hemingway called home in the mid 1900s. It was he who dreamed of — and made a reality — the Saturdays that give scores of kids opportunities to throw, hit and cheer as they develop inner spirits that will lead them to productive lives.

“We don’t have drugs here in Cuba,” Jorge said. “But the children here go to school until four and then they come here to play baseball.”

As he places his hands on his heart, Jorge raves on about how great one boy is, both as a baseball player and as a person. He hugs the young boy, holding him close. Each one of them, he says, he treats as if they were his own.

None of the boys wear matching shirts and pants. They sport hats of different major league teams which, according to Jorge, “are sent to them by friends in America, along with bats and balls.” One wears a long-aging, ragged, blue Yale t-shirt.

The teams do not keep score. Jorge does not allow it. But it is easy to see on their respective faces, the frustration of letting a strike zone pitch slip by, or the pride of getting a hit or sliding into home plate. One young boy has a huge smile on his face as he rounds the bases for what should have been a single, but became a home run, thanks to errors of the other team. Coach Jorge hugs one of his players while talking to some of the team members’ parents. Photo by Alexa Coveney.

Shouts of encouragement or excitement can be heard — and understood, even by non-Spanish speakers, when one child gets a hit or makes an impressive catch.

Parents, mostly mothers of the young players, stay to watch their sons play ball. Unlike a typical Little League game, there are no bleachers for the parents to sit in. Mabelina Frometaneyra, 47, sits on a tree stump near home plate as she watches her 9-year-old son play baseball, the game he has played and loved for the last two years. And even with the differences in uniforms and equipment, she says the sport is the same everywhere. 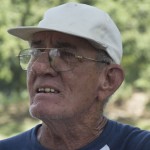 The Hemingway Baseball coach, Jorge, looks on as his players take the field. Photo by Alexa Coveney. 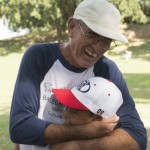 Coach Jorge laughs with one of his young players. Photo by Alexa Coveney. 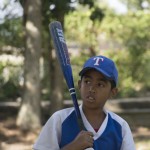 One of the players, wearing a Texas Rangers hate, looks to his coach for advice before sepping up to the plate. Photo by Alexa Coveney.

A young player looks to his coach for advice before stepping up to the plate. Photo by Janelle Clausen. 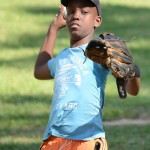 One of the team’s pitchers winds up. Photo by Janelle Clausen. 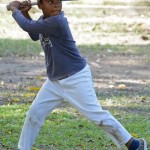 A player in a worn-out Yale University t-shirt gets ready to swing. Photo by Janelle Clausen. 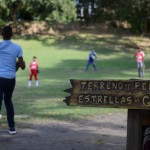 The field where neighborhood kids have been coming to play baseball for more than 50 years. Photo by Briana Lionetti. 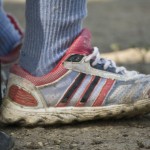 The players do not have cleats, but wear their regular sneakers to play baseball. Photo by Briceyda Landaverde. 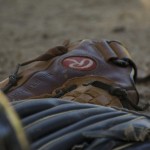 Most of the equipment, like these gloves, come from “friends in America,” according to Jorge. Photo by Briceyda Landaverde.

A player adjusts his cap before taking the field. Photo by Briceyda Landaverde. 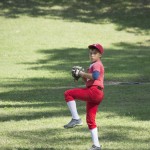 A young pitcher winds up to throw a pitch. Photo by Kayla Shults. 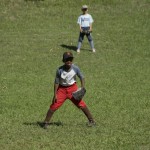 Two players stand in the outfield waiting for the baseball to come their way. Photo by Kayla Shults

This entry was posted in home-third-slider, Sports, Stories and tagged 2016, athletics, baseball, cuba, for the love of the game, havana, hemingway baseball, journalism without walls, kayla shults, kids, photos, sports. Bookmark the permalink.

One Response to For the Love of the Game