I remember, during my first semester at Stony Brook, hearing about an upcoming Journalism Without Walls trip to Istanbul, Turkey. I was amazed at the fact that students were able to go to another country and report. I remember thinking how badly I wanted to do a JWW trip, but I never thought that I would ever be able to go. In part because I thought I would be too scared, but also because I did not think I would have friends I would be comfortable enough to go with.

A year and a half later, while a few of my friends were preparing for a JWW trip to India that summer, there was a rumor going around that the next trip would be to Cuba. I knew that I had to go.

At this point I was feeling more sure of myself when it came to journalism and reporting. I also had friends; really great friends who wanted to go on this trip as well. I knew that if the trip was going to happen, I had to go, one way or another.

So, imagine my excitement and shock, two years after first hearing about JWW that I was accepted to my JWW trip with some of my closest friends and I was actually going to Cuba, a place far too few Americans have gone.

Two years ago I didn’t think I would ever be able to do a trip like this, and now, I am helping to put a website together to commemorate the time we had in this amazing country.

I learned so much. About Cuba, Cubans, journalism, reporting, editing, shooting photos and videos and life in general. Cubans don’t have much, so being there really made me appreciate everything I have (like working Wi-Fi -I’ll try to not complain when the Wi-Fi in my house randomly stops working. At least I don’t have to sit on a street corner to get Wi-Fi).

I will forever be grateful to Professor Ricioppo for putting this trip together, since I know it was not easy, and for showing us the Cuba he fell in love with four years ago on the first JWW Cuba trip. To Professor Howell, for showing us how to be a great journalist. To Chris, Eva and Renier, who were determined to show us the real Cuba, and did an amazing job doing so. To everyone we met on this trip, who opened my eyes to a world so few have seen, and a world I did not want to leave.

And for my classmates, some of my best friends, who I was lucky enough to share this experience with. This trip was a little arroz con mangos, but I wouldn’t have had it any other way. Acere que bola!

I will forever be thankful for getting the chance to not only visit Cuba, but to report there as well. The country is so vibrant and filled with the most beautiful places and people, and I could not have chosen a better place to report abroad. I am so thankful I had this opportunity.

And if you’re reading this, contemplating whether or not you should go on a JWW trip, do it. I promise you it will be worth every penny, and I, myself, would do it again in a heartbeat. 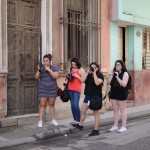 The girls in action! Photo by Janelle Clausen. 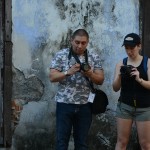 Julio and Emily in action. Photo by Janelle Clausen. 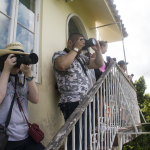 Students whip out their cameras to get the perfect shot. Photo by Rick Ricioppo. 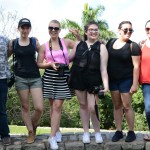 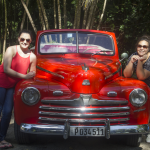 Alexa and Briceyda pose next to an old car. Photo by Rick Ricioppo. 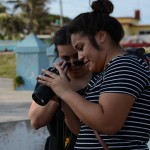 Abby and Briceyda look through some of their favorite photos. Photo by Janelle Clausen. 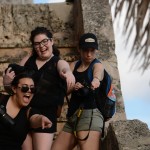 Abby, Kayla and Emily take some time to pose for a picture. Photo by Janelle Clausen. 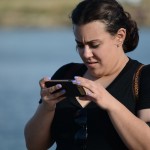 Abby looks through her phone for a good picture of the water. Photo by Janelle Clausen. 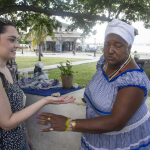 Alexa gets her palms read by a Santeria woman in Regla. Photo by Rick RIcioppo. 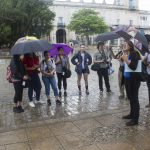 The group didn’t want to waste a single minute, which led to quite a few activities being done in the rain. Photo by Rick Ricioppo. 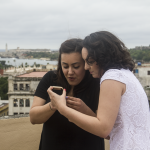 Abby and Alexa look through their photos. Photo by Rick RIcioppo. 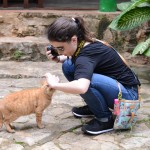 Briana pets one of the many little creatures we saw throughout our trip. Photo by Janelle Clausen.

Alexa and Briceyda before our difficult hike in Vinales. Photo by Rick Ricioppo. 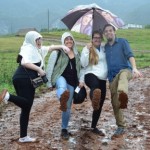 Even in the mud we managed to enjoy ourselves. Photo by Briana Lionetti. 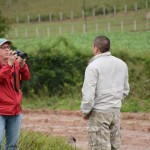 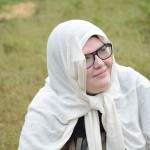 Kayla sported some interesting rain gear on our hike in Vinales. Photo by Abby Del Vecchio. 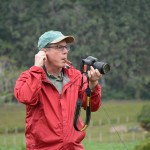 Professor Ricioppo in his element. Photo by Abby Del Vecchio. 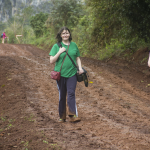 Janelle enjoying herself on the way down from our hike in Vinales. Photo by Rick Ricioppo. 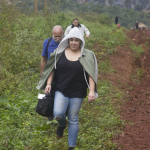 Abby was not too happy on her hike back down in Vinales. Photo by Rick Ricioppo. 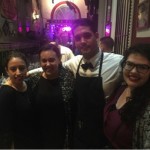 Some of the girls with our waiter, Ariel. Photo by Briceyda Landaverde. 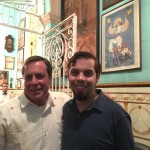 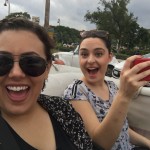 Abby and Alexa enjoy a ride in a taxi convertible. Photo by Abby Del Vecchio.