The Way of the Saints One of the many shrines inside the House of Santeria in Callejon de Hamel, Cuba. People who practice the syncretic religion of Santeria worship many gods. All around the house were figures of different ethnicities, like seen here an Arabic, a Navajo Native American, an African American and a Caucasian all on the same ledge. Photo by Rick Ricioppo.

The Way of the Saints, another name for Santeria, is a syncretic religion, meaning it has several elements all tied together, including Roman Catholicism and Yoruban beliefs, which have origins in Nigeria.

Elias Aseff, a Sanatoria priest, explained that every person who practices Santeria has an Orisha – a semi-divine being.

“We try to identify everyone’s Orisha and develop a relationship between energy and Orisha to solve problems here and now,” said Elias.

In 1959, Castro and the Communist Party allowed for the freedom of religion but they closed churches and even closed down the Jesuit high school he and his brother Raul attended. Over 400 Catholic schools were closed throughout the small Caribbean island. As a religion, Santeria also fell victim to the dogmatic atheism of the island’s communist regime.

One of the main ways for a Santeria believer to identify and connect with his or her own Orisha is animal sacrifice.

“Blood is a symbol of the pact of life,” said Aseff.

In the corner of the room, next to the decomposing fruits and vegetables was a cup of At the House of Santeria in Callejon de Hamel, Cuba, lays a shrine of the gifts to the gods. Santeria is a syncretic religion, meaning it has many different elements tied together. The people of Santeria leave many gifts for the gods, including food, rocks, flowers and the blood of animals. Photo by Rick Ricioppo.

blood. People who practice Santeria see animals as a complement to humanity and they sacrifice animals to save a person needing salvation. Aseff explained that reincarnation is a big factor in Santeria and that believers try to minimize the suffering of the sacrificed animals. The animal doesn’t go to waste either; adherents eat the meat after the ceremony.

Santeria doesn’t have a holy book, but it has been spread by the word of mouth through countless generations since at least the 18th century.

With Catholicism at its core, Santeria is part of a syncretic belief system that is uniquely Cuban. 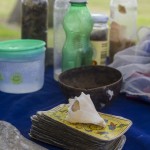 A common set of tools for women who practice the religion of Santeria. These palm readers use sea shells, coconuts, tarot cards, rocks and water bottles filled with herbs. Photo by Rick Ricioppo. 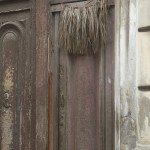 The entrance to a Santeria place of worship. Photo by Briana Lionetti. 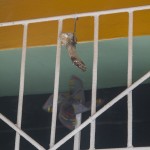 A bone hangs from the railing. It is one of many examples of animal sacrifice the Santeria partake in. Photo by Rick Ricioppo. 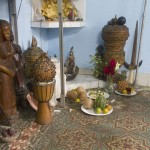 In the corner of the room inside the House of Santeria lays a display of gifts to the gods. These gifts include fruits, vegetables and cups of animal blood. Photo by Rick Ricioppo. 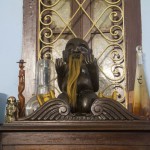 A Chinese figurine sits on a ledge in the House of Santeria in Callejon de Hamel, Cuba. Santeria is a syncretic religion, meaning it has many different elements all tied together, including Roman Catholicism and Yoruban beliefs. Photo by Rick Ricioppo. 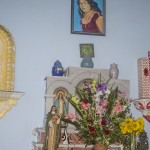 Another shrine to one of their orichas. Photo by Briana Lionetti.